Ray makes the move. Jane feels the rush. Ray says the L-word. Jane breaks her lease. Then suddenly, inexplicably, he dumps her. Just. Like. That.

Now black is the only color in Jane's closet and Kleenex is clinging to her nose. Why did it happen? How could it have happened?

Jane is going to get an answer. Not from Ray. Not from her best friends, David and Joan. But from an astounding new discovery of her own: The Old-Cow-New-Cow theory.

Forced to move into the apartment of a womanizing alpha male named Eddie, Jane is seeing the world of men and women in a brilliant new light. And when she takes her Old-Cow-New-Cow theory public, it will change her career and her whole life. Unless, of course, she's got it all wrong....

"Girl meets boy, boy dumps girl ... Zigman siphons off the tears and the curses and by alchemy converts them into laughter."
— People

"Wit, wisdom, and a sure comic voice...this is great fun,a dog-eared hoot."
— The Philadelphia Inquirer

"I should just marry this one.  She's definitely a wife," Eddie said matter-of-factly, glass of Scotch in hand.  He paced back and forth across the living-room floor in front of me the way he always did when he was contemplating the acquisition--or disposal--of a wife:

Not looking up from my copy of The Social Life of Monkeys and Apes (Zuckerman, second edition), I feigned indifference.  This was not the first time that Eddie had come home from a party and announced that he had met his wife, only to announce two weeks later, without a trace of irony, that he had met another.  I'd recorded it all in his notebook:

But despite the way of all his previous case wives' flesh and the fact that the chapter on baboons I was reading was a real page-turner, the familiar twinge of curiosity overtook me and I remembered the new purpose of my living arrangement with Eddie:

Inserting a bookmark in mid-chapter, I approached the cage and threw Eddie a banana:

But Eddie didn't seem to hear me, lost as he was in the stream-of-consciousness comparative-shopping thought processes I now knew by heart:

He frisked himself, and finding a near-empty soft pack of Camel Ultra Lights in the torn breast pocket of his oxford cloth shirt, he shook out a wrinkled cigarette and lit it, then continued his slow, pensive three-step.

Now, where was I?  Oh, yes, the question of hair color and whether or not she'll be able to keep up with me intellectually.

I shifted uneasily on the couch. This excessive pacing and interior monologue was a radical departure from Eddie's usual post-cocktail-party, prenuptial ebullience.  If I was going to make the most of his willing--if unwitting--participation in my research, I realized I was going to have to extract the reasons out of him.  And while my objective, echoing method of questioning ("It sounds like you're angry that she's an ectomorph.") usually achieved maximum results, this time, because memories of Ray and the wanton polygamy of the male stump-tailed macaque I had just read about had made me mad, I said:

"So are you old enough to be her father, or is she at least out of college this time?"

Raising an eyebrow, Eddie acknowledged my reference to his weakness for nubile wives, a weakness that had inspired me, some months back, when I still thought it--and everything else about Eddie's womanizing--was hilarious, to refer to him "affectionately" as Humbert Humbert.  But Eddie's finding a wife was serious business these days, and so neither of us was laughing.

Inhaling and exhaling, sipping and pacing, Eddie, as always, considered the question carefully.  Hypervigilant in his efforts to capture the true essence of each new wife with precision and accuracy, and in as few words as possible, he said finally, in a tone that implied he had given the question a great deal more than ten seconds of thought:

"Six inches shy of perfect, to be exact.  You see," he said by way of explanation, "she's only five foot one."

The first serious wife contender to come along while I lived with Eddie was the wife he met in early February.

It was a Friday night when he came home and announced his news, parading in front of me in his lucky suit, more than slightly drunk.

"Speak," I slurred. I, of course, had been sitting on the what-will-become-of-me couch all night, sipping Jack Daniel's daintily from an oversized coffee mug.

"Permission to call her?" I slurred again.

"She's had some unfortunate luck with men," Eddie purred, lighting a Camel and continuing to pace back and forth in front of me.  "Luck that I plan to change."

"Good thing you were wearing your lucky suit."

Eddie stared at me.  Obviously, at a time like this--post-hunt, prepursuit--he was not in the mood for humor. "So, what," I said, "you'll call her to ask her if you can call her?"

"No.  My friends who had the party will call her.  Then they'll tell me if I can proceed."

"Permission? How come we don't require permission to be called?" Joan asked when I called her later that night.  But before I had a chance to answer, Eddie hit my curtain a few times. He needed the phone.

An hour or so later he poked his hand through the curtain.

Their first date would be one week thence, Eddie briefed me, the following Saturday night.  All weekend long he paced back and forth across the apartment, planning and refining his strategy for the date.

I watched him from my bed through the slit between the curtain and the wall and made notes:

Subject E's attempts to pursue "wife" have produced specific feelings of anxiety; convinced that a "perfect plan" for first formal encounter must be executed to produce desired effect in wife object.

Subject E grappling intensely with details of said plan (i. e.  activity, feeding venue, etc. ), as well as with issues of manipulation of wife object's feelings vis-Ó-vis her perception of his plan of action.

Finally, on Sunday night, he filled me in on the details of his plan: because Catherine had lived her whole life in a rarefied environment and undoubtedly missed out on her childhood, he would take her to the circus and then to dinner someplace "common."

Such psychological deconstruction and silent deliberation.

Bulls become eerily focused when they're formulating their plan of attack.

Eddie's date went off without a hitch.

Catherine loved the circus, and she loved the Greek diner he carefully picked out.  The following week he took her ice-skating in Central Park and to Rumpelmayer's afterward for hot chocolate and grilled cheese sandwiches.  It seemed his lost-childhood-theme-park strategy was working perfectly.

"Let's celebrate downstairs," he said to me when he'd returned from the date, his Hans Brinker cheeks aglow.

It was only three in the afternoon, and I had never been to Night Owls in daylight.  We sat down at the bar, and before we had even taken our coats off, our drinks arrived.

Eddie took a sip of his Scotch before launching into his update.  "I thought you'd be interested to know that we haven't slept together yet."

No burying the lead this time.

I stopped in mid-sip.  "But you've been seeing her for two weeks.  Standard operating procedure for you is normally two hours."

"I know.  But this is different.  It's special," he said, his voice revoltingly full of reverence.

"You see," he explained, "sometimes, when a man meets someone special--a wife," he clarified, "it's better to wait.  To take things slow." He went on.  "You don't want to sleep with a wife on the first date."

Eddie shook his head dismissively.  Clearly, I wasn't getting it.

"So you didn't sleep with Rebecca on the first date?" I asked.

He looked past me to the windows that faced the street.  "No," he said.  "Though she would have."

I looked out at the street too.  The air was thick and gray, the way it gets before it snows.  "I slept with Ray on the first date," I said, almost to myself.  "Maybe that's why it didn't work."

Eddie turned and looked me in the eyes.  "No, Jane.  It didn't work because Ray's an idiot."

I stared at him.  In all the months I'd lived with him he'd never offered an opinion of Ray.  His words surprised me.  "You think?"

Too young. Ray was thirty.  And Eddie was thirty-five.  That didn't seem too young to me to know whether or not you love someone, and what to do about it if you did.

"You need someone older," he continued.  "Someone more mature.  Someone who can keep up with you."

"Keep up with me?" I said.  "I'm a fucking mess." I saw my current life flare up in front of me like a lit match and laughed--the hole in my wall, the curtain, the ten-by-fifteen-foot bedroom cell, the notebooks.  My life felt suspended in a way it never had: stalled, impermanent, surreal.

"No, you're not.  You just fell in love with someone who wasn't ready for it."

I exhaled slowly and closed my eyes, hoping to see in that blackness the glimmer of the future husband that Eddie was describing.  But that place was empty, and I didn't want to stay there.  I opened my eyes and tried to refocus on the present.

"So what are you going to do about Catherine?"

"We're going to spend the weekend at the Plaza," he said, standing up and leaving a ten-dollar bill on the bar.

I put my cigarette out and slid off the bar stool. "Bring me back a shower cap, okay?"

A young woman in a vaudeville sister act must learn to forge her own path after her twin runs away to Hollywood in this richly immersive debut about love, family, and… END_OF_DOCUMENT_TOKEN_TO_BE_REPLACED 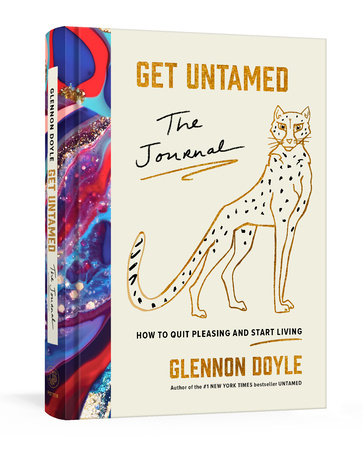 This stunning hardcover journal is a bold, interactive guide to discovering and creating the truest, most beautiful lives, families, and world we can imagine, based on the #1 New York Times bestseller Untamed. “We… END_OF_DOCUMENT_TOKEN_TO_BE_REPLACED