When tragedy strikes across the ocean, Ellie Lerner drops everything—her marriage, her job, her life in the Boston suburbs—to travel to London and pick up the pieces of her best friend Lucy’s life. While Lucy’s husband, Greg, retreats into himself, his and Lucy’s eight-year-old daughter, Sophie, has simply stopped speaking. Desperate to help Sophie, Ellie turns to a book that gave her comfort as a child, The Secret Garden. As its story of hurt, magic, and healing blooms around them, so, too, do Lucy’s secrets—some big, some small. Peeling back the layers of her friend’s life, Ellie is forced to confront her own as well: the marriage she left behind, the loss she’d hoped to escape. And suddenly Ellie’s carefully constructed existence is spinning out of control in a chain of events that will transform her life—and the lives of those around her—forever.

“I sat down to start Julie Buxbaum's glorious second novel, After You, and could not get up until I was finished.  After You is a surprising, funny, and deeply moving novel about how we learn to take care of the people who matter most to us—and, if we are lucky, learn to care for ourselves in the process.  With Buxbaum's signature wit and warmth, After You is the perfect companion to The Opposite of Love.  Read it.  Just make sure you have nowhere to be that day...”—Laura Dave, author of The Divorce Party

“Pitch-perfect from the very first page, After You is a tender, gripping story of how far we sometimes need to wander in order to find our way back home. A must-read for anyone who has ever wondered how to jump start her life, and really, isn’t that all of us?” — Allison Winn Scotch, author of Time of My Life

“Buxbaum writes with honesty and grace about the things we know about our friends and the things we wish we didn't.   After You highlights—beautifully and compellingly—the truth that sometimes we have to
lose the people closest to us to find ourselves."—Jodi Picoult, author of Handle with Care and My Sister’s Keeper

Let’s pretend that things are different. That in the last couple of days, I haven’t become the kind of person who resorts to wishing on eyelashes, first stars of the night, and the ridiculous 11:11, both a.m. and p.m., in earnest and with my eyes closed. That Lucy and her family haven’t transformed into tabloid stars with a full picture on the cover of the Daily Mail with the headline Notting Hill Murdergate!, and the lead story on the BBC evening news. Let’s pretend that I am home, on the right side of the Atlantic, the one where I understand the English language, and that tomorrow will be just like early last week, or the week before that one, when the days were indistinguishable. That it’s not necessary to resort to memories—to a time before—when I think of Lucy.

How about this: Let’s just pretend that Lucy is not dead.

That she will not continue to be dead now, even though that’s what that means—dead.

“Want some more?” I ask Sophie, Lucy’s eight-year-old daughter, but she seems uninterested in the elaborate bowl of ice cream I’ve doused with concentric circles of whipped cream. She sits with her knees drawn to her chest and her arms wrapped around them. An upright fetal position, a pose that has been as reflexive for her as irrational wishing and pretending has been for me. Striped pastel pajamas ring her legs—pink, blue, yellow stripes—and on top, she wears a long-sleeved T-shirt with a decal of a purple horse with a silver mane. Her socks have abrasive soles that scratch and swish along the kitchen tiles, a sound I haven’t heard since my own childhood and that I associate with my younger brother, Mikey, asking for a glass of water before bedtime.

She shakes her head no.

She stays noncommittal. Her tiny glasses slip down her nose and are caught by her finger, pushed back up with an efficient tap. They are tortoiseshell frames, brown on the outside, pink along the inner edges, like an eyelid, and they magnify her already large brown eyes, so that she always looks just a tiny bit moony.

Sophie has not been speaking much since the accident. That’s what we’ve been calling it—Greg, Lucy’s husband, and I—“the accident,” a comforting euphemism despite the fact that there is nothing accidental about what happened. The word homicide is one that no eight-year-old should ever have to hear. Using accident makes us feel better too. As adults, we can handle an accident; that’s in our repertoire.

I am not sure when Sophie last spoke out loud. She was interviewed by the police on Thursday, right afterward, and somehow Lucy’s little girl found the strength to use her words and describe the unspeakable. When I arrived less than twenty-four hours later, blurry from grief and the red-eye, she said, “Hi, Auntie Ellie,” before putting her arms around my waist and burying her face in my shirt. But since then, since that first greeting, spoken in her crisp British accent, I can’t remember the last time I heard her voice. Did she say good night to Greg before he went upstairs and knocked himself out with Xanax?

“Where did you get that shirt? It’s pretty. And that horse has really cool hair.”

“Soph, sweetheart, are you not talking?”

Sophie just looks at me, her eyes burning in a silent protest.

Shrug number three. She looks impossibly small and thin, the stringiness of her arms and legs exaggerated by the unforgiving cotton of her pajamas. I wish she’d eat more. I want to feed her cookies and sugar cereal too. Tomorrow, first thing, I’ll replace their two percent milk with full fat.

My mother, a therapist, warned me this might happen to Sophie. That kids often go quiet for a while in the wake of a traumatic loss. Their only way of exerting control in a world in which they clearly have none.

It’s been only twenty-nine hours since Lucy’s funeral, an event so improbable that pretending still works. Surreal, too, like the news vans that are idling out front of her house, waiting for a sound bite. I want to scoop Sophie up into my arms and let her cry into my shoulder, but she is not the sort of kid you just scoop up. She would know that I was doing it more for my comfort than for hers.

“Okay,” I say, as if she’d actually answered me. “It’s all right if you don’t want to talk for now. But not forever, right? I love that voice of yours. Cheerio. Let’s take the lift and go to the loo,” I say in my best British impression, which used to be a surefire way to make her laugh.

“Speak like me, Mummy, Auntie Ellie!” Sophie used to demand of Lucy and me when I would come to visit, and the two of us would go back and forth, spitting out all of the British expressions we knew. Even after nearly a decade in London, and despite a husband and child whose inflections were as posh as the Queen’s, Lucy’s Boston accent had barely softened. She always paa’ked her caa’ in Haa’va’d Yaa’d.

Today, Sophie ignores me and looks around like she’s not sure whose kitchen this is. We are in the breakfast nook, with its Americana diner style, the sort you would see in a cornflakes commercial: two kids, two bowls of cereal, and two glasses of orange juice, with two parents—always two cheerful parents—rushing everyone out of their red pleather seats and off to school after their nutritionally balanced breakfast. I can picture Lucy deciding to put a booth in the corner, knowing that making your house look like a home is the first step.

“We’re going to be okay, you know,” I say, and run my fingers through Sophie’s curly dirty-blond hair; they get caught on a knot. I remember the first time I held her, when she was less than a week old, bald and tiny, and how she would sleep with her mouth opening and closing against my arm, her dreams, no doubt, filled with glorious imaginary milk. She had seemed so fragile then, so far from a real person, that looking at her now, a fully formed little girl, beautiful and tough and exerting her power in the only way she can, makes me glow with a vicarious pride for Lucy. My best friend did a lot with her thirty-five years on this planet; her exposé on the corruption in the Chilean government should have won her a Pulitzer. But of one thing I am sure. Making this creature, this fierce mini-Lucy, is my favorite of all.

When did I start speaking a language I don’t recognize as my own? I dismiss the stalking reporters with copied phrases I’ve learned from watching TV, please respect our privacy during this very difficult time; reassure Sophie with silly platitudes, we are going to be okay; lie to all the well-wishers at the funeral Greg and I hastily planned, Lucy spoke so highly of you. I guess when your world blows up, when you lose the person you were closest to for thirty-one years—almost my entire life—language skills are the first to go.

Here is what happened: Lucy woke up a few days ago, happy and healthy, trapped in a tent of all the clichés of a perfect modern adult life, with the international glamour of an American ex-pat thrown in to boot, and one hour and forty-five minutes later, while walking Sophie to school, she died. Just like that. No, she didn’t die, just like that. She was murdered. Apparently, there was a knife and a meth-head overly interested in her two-carat diamond ring, some idiotic resistance on Lucy’s part, and then it was over.

And, yes, there is a worst part of all: Sophie saw the whole thing.

I am not surprised Lucy fought back—she’s always had an inhuman amount of courage—but I am surprised she fought back for that ring. She hated that ring.

And now I am here, in her kitchen, sitting next to her daughter—my goddaughter—trying to adjust to this new world we have entered. After Lucy. I am sipping tea because, from my experience over the last few days, that seems to be what the British do in situations like these. As if consuming mass quantities of flavored hot water with a spot of milk and sugar will make everything better. But it’s too late for stopgap measures. The grief has started to burrow into my skin like a parasite, slow and steady, in inverse proportion to my disbelief.

“Soph, what do you want to do? You want me to be quiet, too, for a bit? We can just sit here.” I get a nod, slow, as if she wants to say, Yes, please. I can tell simply by looking at her that we both want exactly the same thing. For it all to stop for a little while.

And so the two of us do the closest thing I can think of. We sit in the booth and stare straight ahead at nothing in particular. I pull her in closer, and her head rests against my shoulder.

We pass the next hour this way. Silent and watchful. Like we are waiting for a bus that may never come.

A young woman in a vaudeville sister act must learn to forge her own path after her twin runs away to Hollywood in this richly immersive debut about love, family, and… END_OF_DOCUMENT_TOKEN_TO_BE_REPLACED 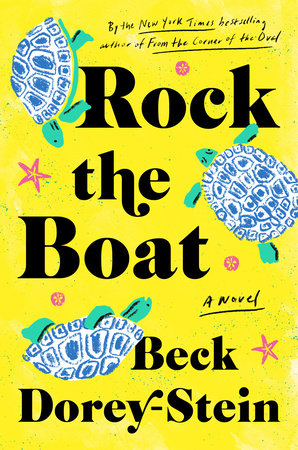